Just finished my new blanket. Took me less than a week – yarn I needed arrived on Wednesday and the whole thing was done on Sunday. Pretty quick.

I should probably start at the beginning.

Some time ago there was a sale on DROPS yarns (very nice stuff in general) and I bought some random balls in colours that seemed interesting. “Andes” was one of these and finally I made a cowl/scarf thing out of it. Which was a total failure, because the outcome was way too thick and stiff. Probably I used a hook some sizes too small. Well.

So this week I undid it and added some cream Andes to it as a contrast, took a 8mm hook and hooked a round ripple blanket. In three days (was kind of busy on Saturday). After work only.

So, here’s the outcome. Photographed inside, no natural light, so colours are a bit wrong, but it’s, in general, somewhat purple-ish. It’s 130 cm in diameter (from point to point) and it covers my new armchair quite nicely :) 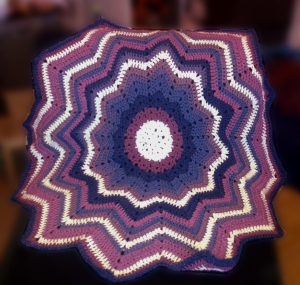 A t-shirt for crafters.

I have this tiny little shop on CupSell with t-shirts sporting some texts I wanted to wear (or my friends asked for). So last week I made one with a PICTURE. Namely, a crochet hook :)

This is a t-shirt for everyone who does crafts on public transport.

As I usually spend my time on the tram or the underground crocheting or knitting, I find myself an object of curiosity of random people, staring at me in confusion as I stab that wooly square with that weird stick and make my way towards the next afghan or another scarf.

So, a club t-shirt for everyone with the same experience :)

I’m still going to be posting here, but I want to divide content:

Blog will be for:

Tumblr will be for:

I’ve only just remembered that I’ve never written anything about my attempt at using Tchibo straight knitting loom. It was a disaster. I actually went there and returned it (got all my money back, good Tchibo policy here).

It was soft and flexible. VERY soft. When I put the first round of yarn on it, the sides bent into the middle. Whatever I did, I couldn’t make any kind of consistent knit, it all came out as a bunch of very very loose loops.

Look from the top (see how it bends into the middle?):

Look from the side (only a few rows, but even when I made some more in hope of this getting a bit tighter, no luck): 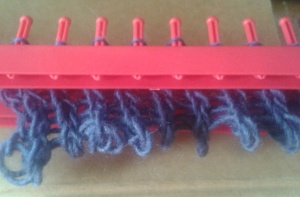 But as you can see in the second photo, it’s all fault of very poor construction – the frame itself is hollow and walls are very thin. The plastic bent under slightest pressure, including loosely threaded yarn.

In summary: when buying a knitting loom, make sure the frame is solid (wood is good!). PRYM round looms I’ve tried out are very sturdy. I’d like to find a straight one of the same class. Possibly with pins much closer together.

If you want to look me up at other sites, I have now a profile on Ravelry. I’m adding my stash listing there and also all ongoing projects and queued ideas.

After 2 years of school, we’ve tried out and discarded multiple brands of pencils, crayons, felt pens and all manner of writing implements. The goal is to find the brand that will deliver pencils that are:

For the “place of origin” I’ve disqualified immediately ASTRA (Polish brand, but everything made in PRC), Maped (simply made in PRC) and several other brands, including all cartoon-branded Disney stuff. The same reason.

What is left that we haven’t tried last year?

Lyra Osiris. These some in 6, 12 and 24 packs, short and long versions and also an aquarell option. I’ve simply bought the standard 24-pack and we’re really happy with them. The colour is vivid, the leads are soft, triangle shape makes it much easier to grip. Also, they are made in Germany. All around – yay! :)

Histar Supercolour. They were added to something else, a gift from family. No idea of country of origin and I can’t manage to google them, which is weird. 6-sided, good colours, slightly harder than comfortable. Good backup set.

Zębozaurus TOMA. Name means “Tooth-o-saurus”. Supposedly bite-resistant and slightly bendable (but definitely will break if you try hard enough). Really good colours, but lead slightly hard. Ok for drawing, not that good for filling in bigger areas. Made in Poland (hopefully). Non-wood cover made from resin. No splinters when broken.

BIC Conte Evolution. Big mistake. Also break-resistant (or so they say, they apparently haven’t tested this on 8-yr olds). The drawing is a PAIN. Colours theoretically very nice, but not much is left on the paper. Apparently in the pursue of bendable leads they lost the point of pencils actually drawing. The same goes, sadly, for their normal pencils. They all behave as if they were slipping on the surface, instead of “catching” on it and leaving a trace. A grownup will focus and find the right angle to make use of them. A kid will give up.

Staedtler Erasable. This was one of the best buys of last months. Coloured pencils you can erase? Perfect :) Wood from managed forests (a plus), really rich colours, reinforces against breaking (no idea if it works or not). Earasability is good, some ghost of a colour is left, but it depends on how hard you pressed when drawing. Good for bigger surfaces and, of course, for anyone who has some problems with stability and needs to erase this or that. Con: 6-sided.

Lakeland round pencils. I found only one stub of these in our “leftovers” drawer (tiny drawer for pencil stubs – too short to use them comfortably, too long to just throw away). Means he used up a 12-pack before I even noticed it. Soft lead, but not the softest in this review. Nice coverage of the surface. If they made triangles, we’d go back to them.

So, finally? Lyra. I think the triangle shape and options offered win this time. Will buy more Lyra for the 3rd grade.

Colour: dusty pink, cream, pastel olive (others, too, but I tested only these three)

A coworker decided to destash ;) She presented me with her 4 skeins of never-touched yarn – 3 Red Hearts and 1 Carron Simply Soft. I started with the RHs, all of which are more or less pastel-ish, although the pink, when concentrated in one ball, is rather striking. I hope that mixed with others it will work nicely.

First thing I noticed is that, unfortunately, this is one of the yarns that squeak. Squeak squeak squeak every time you hook it or knit it or even mill it. Perfect for the knitting mill and would probably make a great knitted blanket or a hat&scarf set for someone who can’t stand wool. This being pure acrylic, no scratch. But a squeak.

I’ve milled the cream skein, but gave up on the blanket idea when I counted how small it would be, even if I used both pink and cream (only like a 1m x 70 cm rectangle, or so). So I undid it, and it cooperates with no fuss and no fuzz, at the same time giving a bit of resistance which is always nice as it means your work won’t just undo whenever you drop a stitch.

It crochets nicely and the grannysquares for my purple/pink blanket are getting done in record time, but again, that squeak. I hope in the whole blanket it will be balanced by other, quieter yarns.

Pros: undoes nicely, colours are good, easy to pull the “inner end” out and work from both ends or with double thickness, perfect for beginners.

Cons: SQUEAKS. Not to be used alone if you want to wear the finished work.

Suggested needle size: 5,5 (I use anything from 3,5 hook to 6mm hook/needles, depending on intended outcome)

The colours. That’s what won my heart. The COLOURS. Have a look at the producer’s website and try telling me you didn’t just drool over the colours. I love all of them, especially 600 (have a pair of socks knit with it), SURF 441 and 446 (waiting their turn to be turned into scarves) and 601 (I’d sooo want to knit a sweater with this one).

The yarn is very, very even, with slight fuzz. Undoes with effort, leaves lots of small threads/threadballs on the undone yarn. Slight scratch, but I can tolerate it even in a winter hat.

No discernible strands, but in places when one colour blends into another you will see the “tail” of one colour twisted with the next one (see producer’s photo for 592 or 602). The gradient change is quite long and single colour also lasts long. In socks it makes for ~5cm per colour + soft colour change.

The colour saturation and combinations give effects very close to DROPS Big Delight (I used a bit of Magic in my Big Delight poncho when I miscounted and run out of the main yarn half a row before end). Can be easily mixed in the same work/substituted.

Needles? Yes. Crochet? Totally. Knitting mill? Perfect, makes lovely hats and scarves, with these colours you will be visible from afar this winter :)

Would I buy more? I already did! Lots and lots, waiting for their time, lying quietly in the box.

Structure: Three strands, visible and separable, well twisted together. Next to no scratch. I wouldn’t make a hat out of it, but I’d be willing to risk a scarf.

There was a big sale on DROPS yarns in May and I kind of went overboard with various kinds I bought, so I have yet another DROPS to check out and review. I’ve unpacked my 8 balls of Alasca (so, total of 400g) and started on a waistcoat for my son. Combination of dark blue and dark grey seems to have this “proper, school-ish” vibe, so he will have something lighter than a full pullover for the official school days.

I’ve started on the blue squares and the yarn is really, really nice. As it’s thick, the outcome is visible almost immediately, but of course also the balls disappear almost immediately. Four 11cm squares and one ball is almost gone (so 4 will make 16 or 17 squares). The feel of if when working is really soft, with almost no scratch. Also almost no sheep smell, which sometimes accompanies untreated wool yarns.

Now, I wouldn’t recommend using it for hats, if you have any kind of sensitivity towards wool, but I personally would risk a scarf or mittens. Would not knit a polo neck sweater or anything tight-fitting/direct on skin (except for abovementioned scarf or mittens). Feels very, very warm. I’m thinking about a pair of ugly but warm socks when I look at it (all my socks are slightly ugly and these colours would not cover my sock-knitting blunders).

Would buy more? Yep. The colour range seems nice and I may be in need of a sober, grownup scarf someday.

I’ve bought two balls of random Sarayli yarn when I was on vacation and the only source of handmade materials was a local village yarnshop. The existence of one was a bit of a surprise, in fact, but I made use of it ;)

The yarn crocheted wonderfully into this granny-square scarf (3 sq per yarn ball, some tiny amount left due to uneven crocheting). 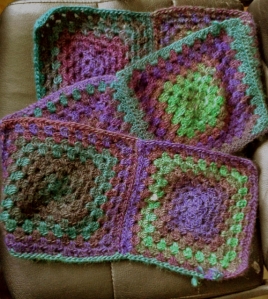 + fabulous colours – have a look at the producer’s page, there’s more! (ok, some are a bit childish/sugary, yes)

+ fuzz enough to make sure the work is stable

Summary: will ABSOLUTELY buy more. At least one more ball of this colourset, to make the scarf longer.